Suppose we have N=10,000 users and want to run 2 A/B test experiments, $E_1$ and $E_2$, both of which are trying to move the same metric. In this post I will assume the metric we are trying to move is timespent per user (or something like it, a number assigned to each user). The same logic also applies to conversions, but timespents are a better illustration of the concepts.

At face value, this is an error in statistical reasoning. We don’t really care why an individual user spent more or less time with the product, what we care about is the average timespent between A and B. As long as that measurement is accurate, individual users’ being influenced by multiple experiments is irrelevant. Accurate here means that we would measure the same thing (statistically) if we were running only one A/B test.

Having said that, there are cases when running multiple tests on the same user leads to statistical errors: this happens if the experiments interact. In other words, if we assume that run by itself $E_1$ lifts by X, and $E_2$ lifts by Y, and if we run both than the lift is X+Y, then we're fine. But if the effects interact with each other, in which case the combined lift is something else (eg. X+Y/2, because the presence of X suppresses Y), then we cannot run them in parallel. This happens if eg. the experiments are making UI changes to the same dialog.

If the experiments are independent, there is in fact no need to limit the sample sizes, both experiments can run on all 100,000 users, in parallel.

To understand why parallel experiments work, let’s remember how an A/B test is modeled in our simulations: each user is represented by a independent random variable (RV). Independent, because we assume users don’t affect each other (so, we’re not in a social network setting here), and it’s a random variable because individual user outcomes are random. In this post, like before, I will use an exponential distribution to model timespents. The exponential distribution has one parameter $\mu$, which works out to be the mean. I will assume that by default, users have $\mu=1$.

In our timespent simulations, when we say that an A/B test is actually working, we model this by increasing the $\mu$ parameter for the user’s random variable. In the end, we will sample the random variable, so the actual outcome can be any timespent $t>0$, but on average, users with lifted parameters will have higher timespents. This is the key: in an A/B test, we don’t care about individual user’s outcomes, since they are statistically random anyway, we care about measuring accurate average lifts between groups of users.

There is an easy visual way to understand why parallel A/B tests work. Before we look at the parallel cases, as a starting point, let’s look at the simple case of just one experiment. We can use code like in the previous posts for this:

What this code is doing: there are $N=10,000$ users, we will split them evenly between A and B funnels in the experiment (per funnels, 2nd column). Each user is modeled by an exponential random variable's parameter (timespent_params, which has default parameter 1). The function simulate_abtest() assigns each user into A or B, it returns this assignment into funnel_assignment. Further, it adjusts the timespent_params, by increasing the RV’s parameter for users in the B bucket by 1, leaving As alone (per funnels, 1st column). The final for loop samples the exponential distributions and stores the actual timespent values per user in timespents.

The left side image in fact has 4 colors. After random sampling, the right side looks just as random as in the single A/B test case. Now let’s do the same trick as before, and draw the image so that As are on top, and Bs are on the bottom. We can pick whether we do this for $E_1$ or $E_2$, we will see the same thing, here I'm doing it for $E_2$'s A and B:

After visualization, we can also numerically see this:

In the first test, we lifted by 1. Because of the other test also running and changing the random variable parameters, on average our random variable parameters were shifted by 0.97 (instead of 1). After sampling, the actual lift was 0.96. And at this sample size, this lift had a very low p-value (since it’s a doubling, it’s easy to measure). And in the next row, we can see the second A/B test, which is also easily measureable.

Maybe this only worked because there were only 2 experiments, and we lifted the RV’s parameter so aggressively (doubling, tripling). Let’s see what happens if we run 11 in parallel, with a $\mu$ lift of 0, 0.1, 0.2 ... 1.0 (so the first one doesn’t work, the last one doubles). The numeric outcomes:

It’s still pretty good. Let’s visualize the middle one, where $\mu$ is lifted by 0.5:

We can see that on the left, because there are so many A/B tests in play, the RV parameters also look random, but we can still see the difference, also in the sampled timespents on the right side.

First, the average parameter lifts, with errors to show the variance: 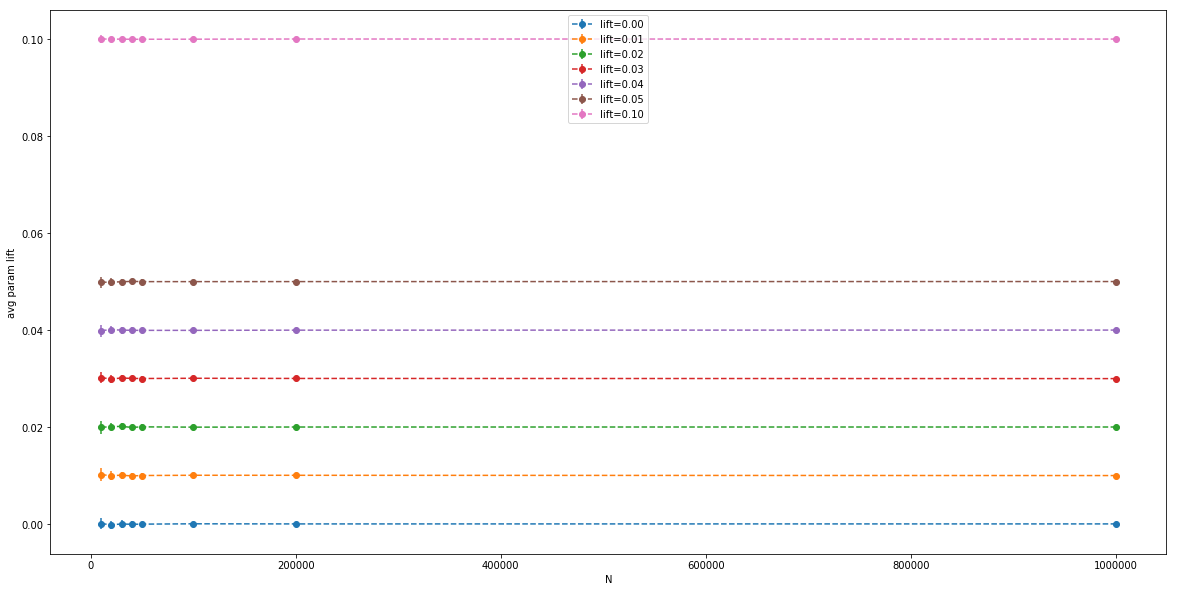 We can see that even at low N, the average parameter lifts are pretty close to the intended experimental lift. The variance is so small, we can barely see it. Let’s zoom in on the orange line: 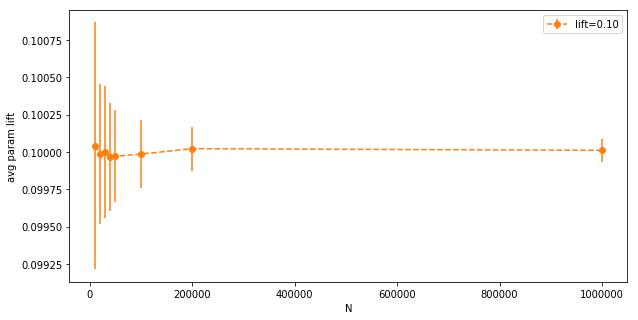 The variance goes down with $N$ as expected, but even at $N=10,000$ it’s very low (notice the y-axis). Now the same for actual measured lifts (after the random variables are sampled):

Here we have bigger error bars, it’s hard to see what’s going on. Let’s look at the orange bar again: 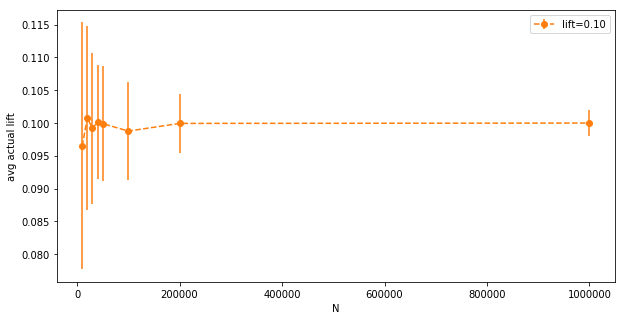 The magnitude of the standard deviation (the error bar), plotted by itself:

Finally, we can plot the average measured p value (with a Z-test), for each parallel A/B test, for each $N$: 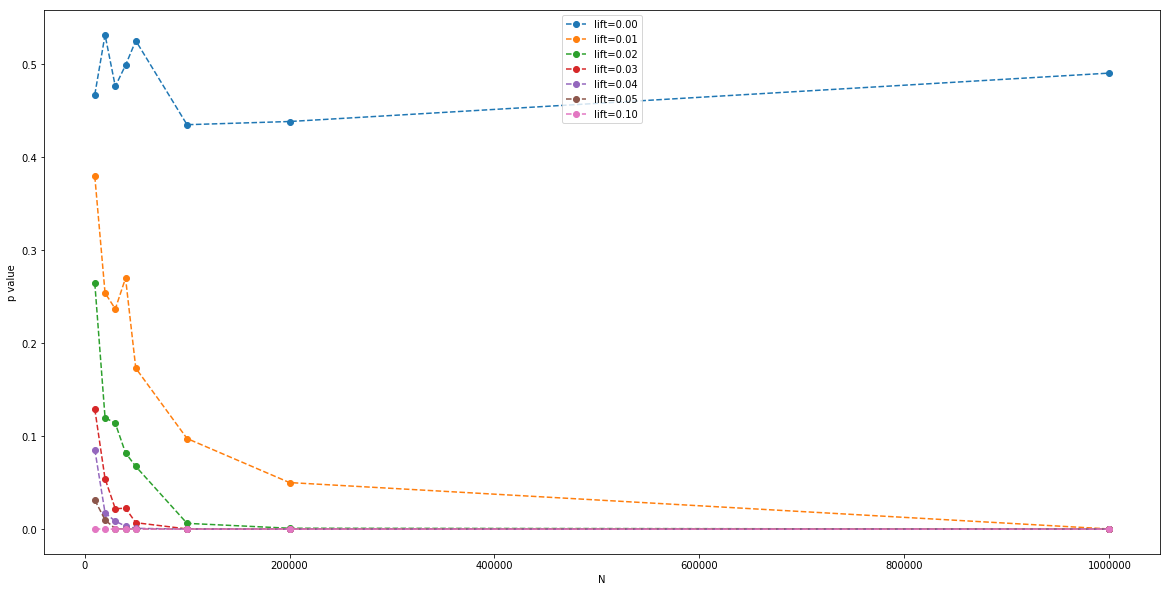 This is essentially a clue to the sample size $N$ we need to be able to detect the signal at a given $\alpha$ critical value of p.

As these Monte Carlo simulations show, it is possible to run multiple A/B tests at once, across the whole population, on the same outcome metric, and still measure the experimental lift accurately, assuming the experiments are independent.

By randomizing user assignments into A/B test experiments, it is possible to run multiple A/B tests at once and measure accurate lifts on the same metric, assuming the experiments are independent.