The Culture Map by Erin Meyer is a great business management book on how to communicate and manage people from different cultures, or just people with different ways of working. These are my notes of the book, which I recommend you should buy right now. 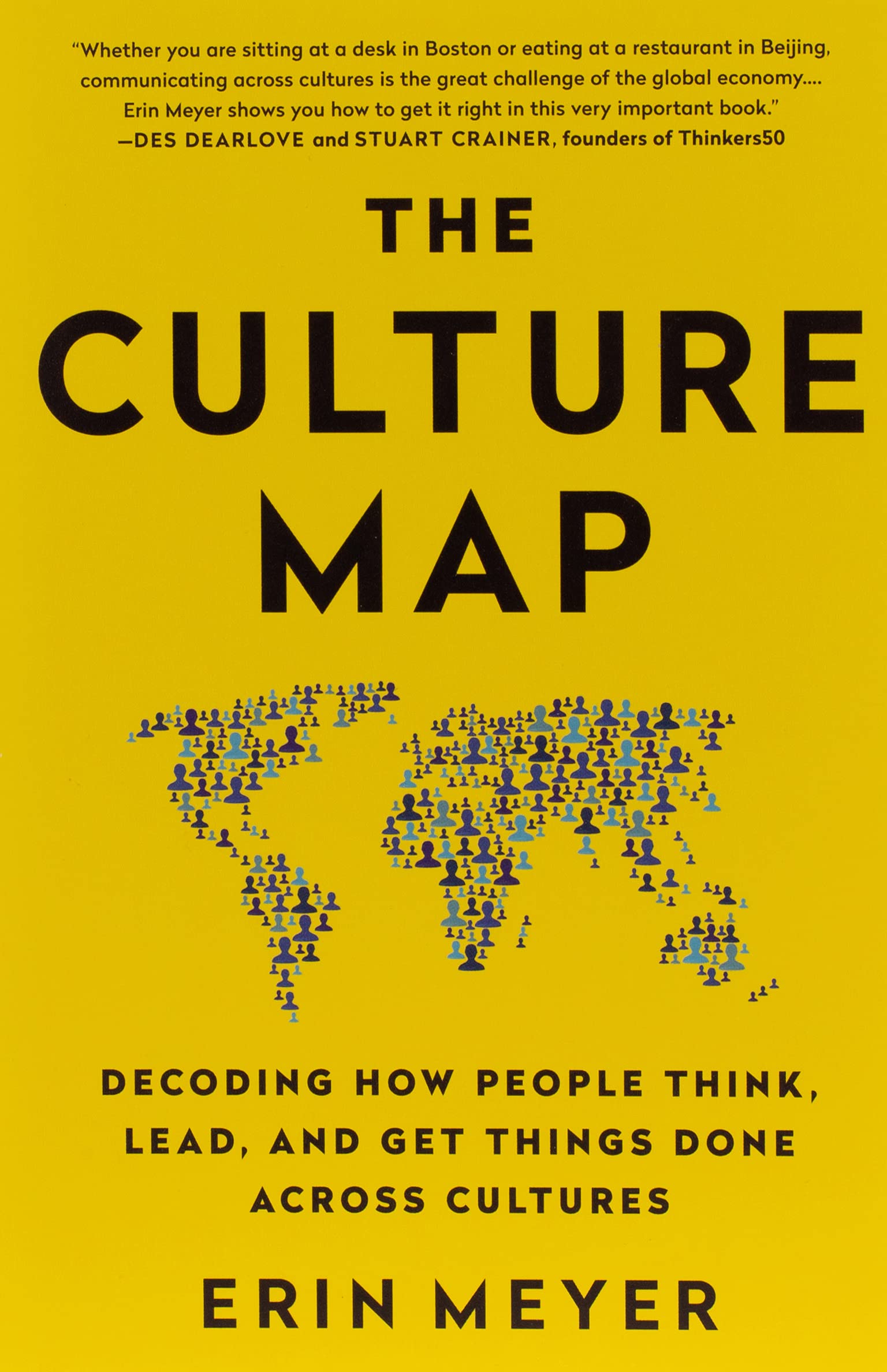 The Culture Map by Erin Meyer is a system of 8 scales which can be used to determine how cultures vary along a spectrum. The scales can be used to analyse one culture relative to another and decode how culture influences your international collaborations. If you take the example of an Israeli executive who has been appointed to manage a newly purchased factory in Russia, and compare where both countries are on the scale, you can see where difficulties could arise. 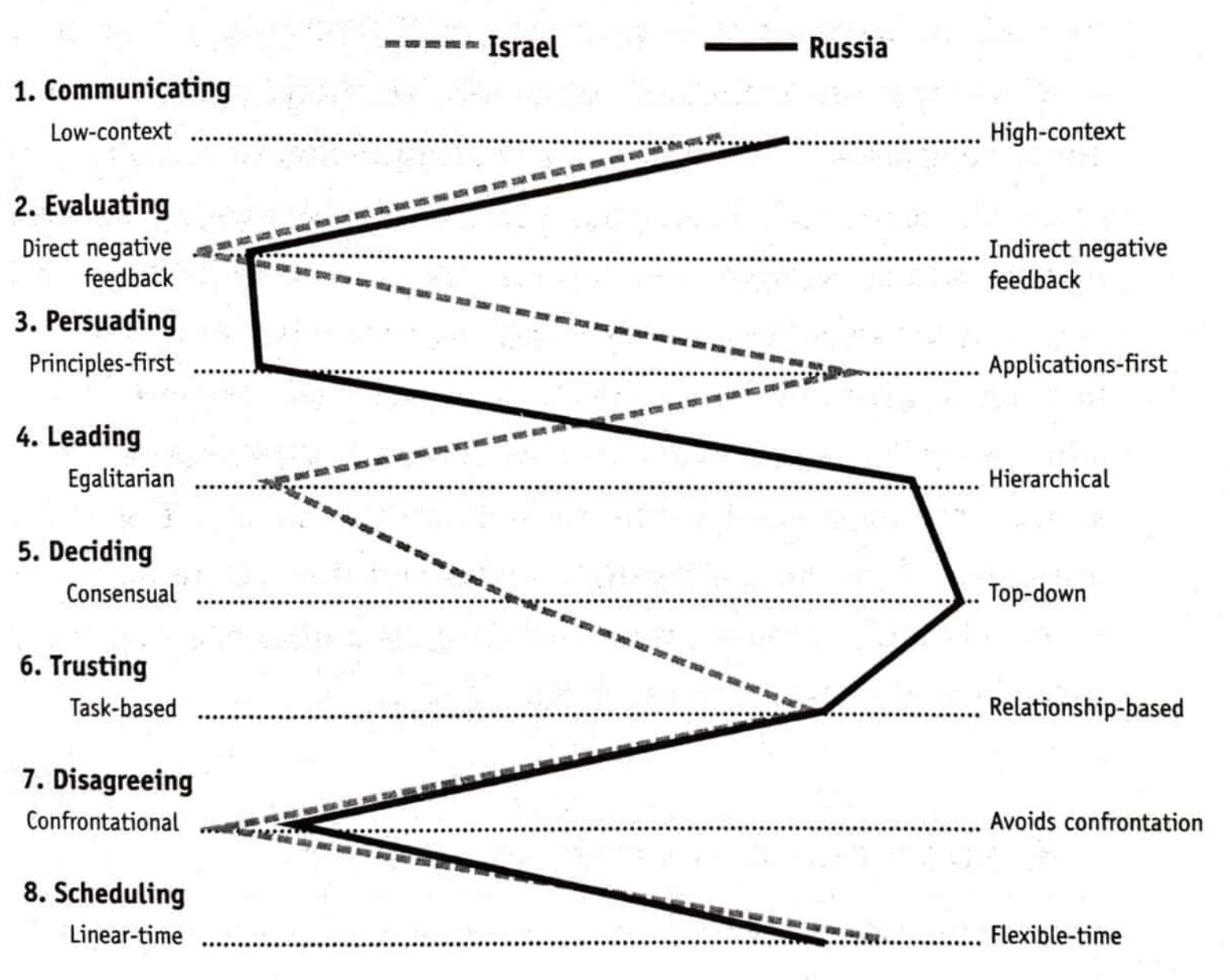 The author's website has a non-free Culture Mapping Tool that draws the above plot for the countries selected, ie. the country composition of your team(s).

Let's now look at the 8 dimensions considered in the book.

Low context: say it like it is, precise, simple clear, intended to be taken at face value.
High context: messages are nuanced, impled, need to be "decoded" or read between the lines. Americans are the most explicit or low-context culture there is (low-context meaning their conversation assumes relatively little intuitive understanding). This is not surprising for a young country composed of immigrants that prides itself on straight-talking. Japan and other East Asian countries represent the other extreme.

Meyer offers strategies for negotiating these differences, but the most basic solution, as with all scales discussed in the book, is simply to be aware. Thus Americans in Japan should pay attention to what's not being said; while Japanese in America should brace themselves for direct language.

How directly (negative) feedback is given. Cultures that are direct wrt communication are not always direct wrt feedback, eg. US.

Concept first: like in a prussian school, first learn the theory, then apply it. In a business setting, this means first give theoretical arguments, then get to the actual business application.
Application first: focus on solving the problem at hand, and worry about the theory later. In a business setting, this means starting with the proposed action item, and then explaning why it's a good idea. 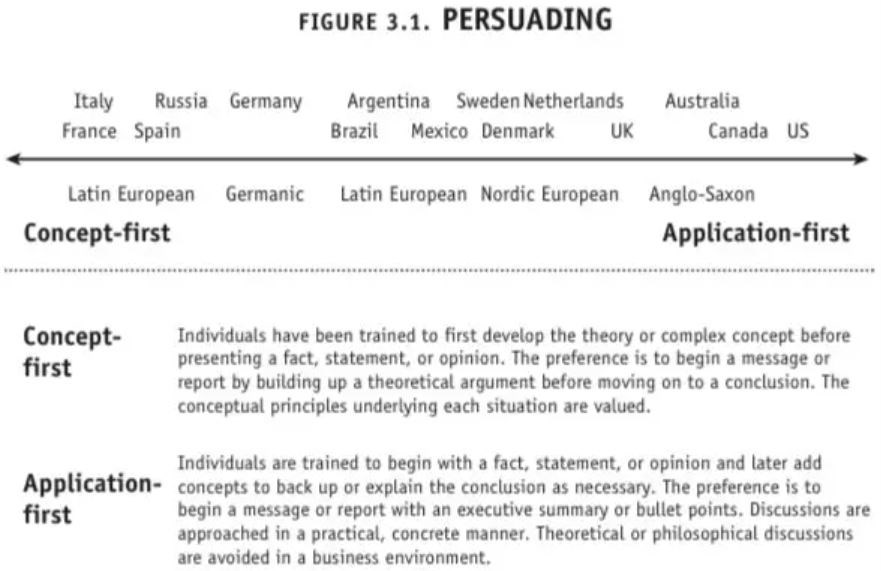 This trait shows up in everything from how people give presentations or lead meetings to how they write emails. 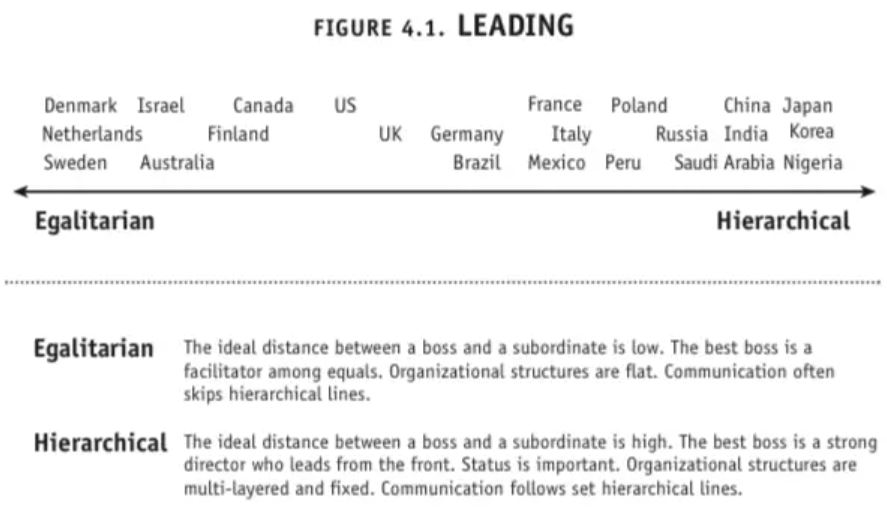 "In Denmark, it is understood that the managing director is one of the guys, just two small steps up from the janitor," a Danish executive told Meyer. This represents one extreme in attitudes toward leadership. On the other side of the spectrum in countries like Japan and Korea, however, the ideal boss should stand far above the workers at the top of a hierarchy. America's outlook on leadership falls somewhere in the middle.

How organizations make decisions relates closely to how they view leadership, but with some important differences.

Notably, while Japan has a very hierarchical leadership system, it has a very consensual decision-making system. This is the famous ringi system, which involves building consensus at a lower level before bringing a proposal to a higher level, thus enabling broad corporate consensus.

Task-based: business relationships are just that, and do not require or assume personal friendship. Business partners may not trust each other (completely), but believe that contracts and the legal system creates boundary conditions that channels the other party to do their part and protect them if not.
Relationship-based: business relationships are only established with or after creating a personal connection and some personal trust, like getting to know each other, having lunch or dinner, going out for drinks, or in some cultures, getting connected to each other through trusted parties. 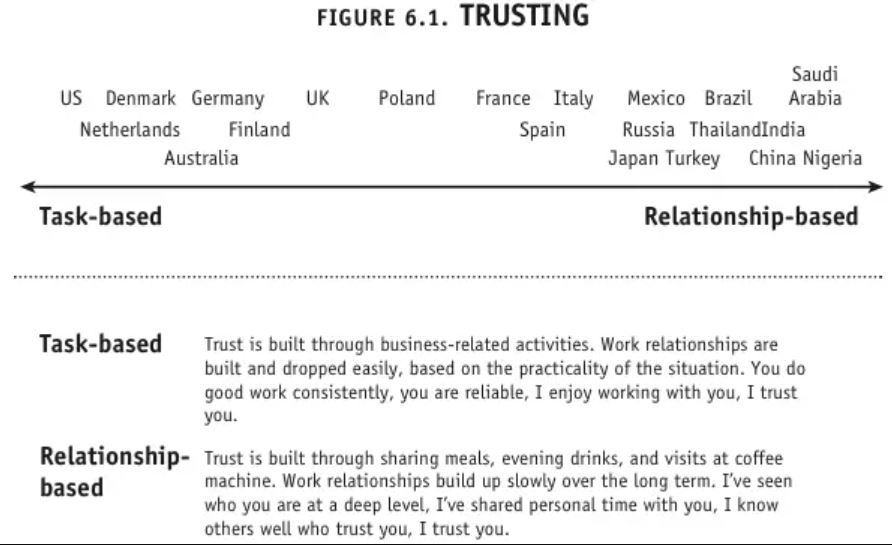 In some cultures, notably America, people don't worry so much about trusting each other because they trust their legal system to enforce contracts, and so business negotiations focus on what's practical.

In others, including many emerging market economies but also to a lesser extent Western Europe, personal relationships are much more important, in part because people don't trust their legal system to enforce contracts. 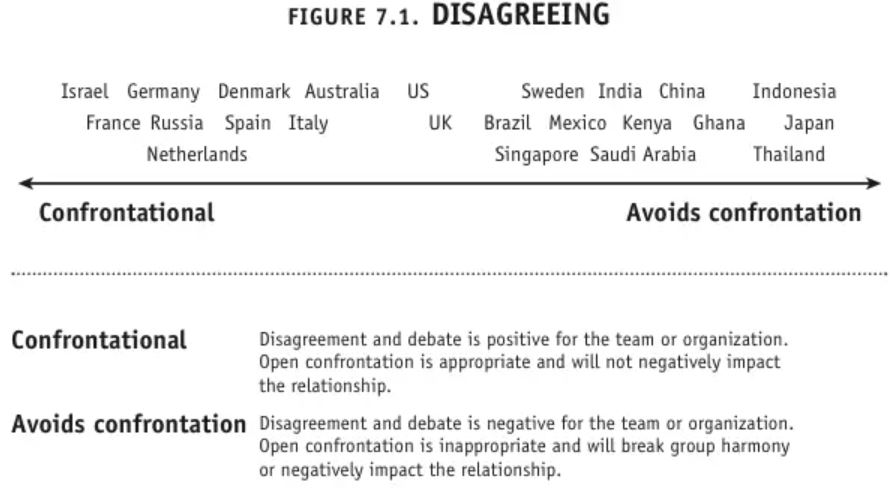 Linear time: 10AM means 10AM, a few minutes late is okay. Time estimates are assumed to be somewhat reliable and taken seriously.
Flexible time: 10AM can mean anything from 10AM to 12PM. Appointment timings and time estimates should not be taken too seriously. 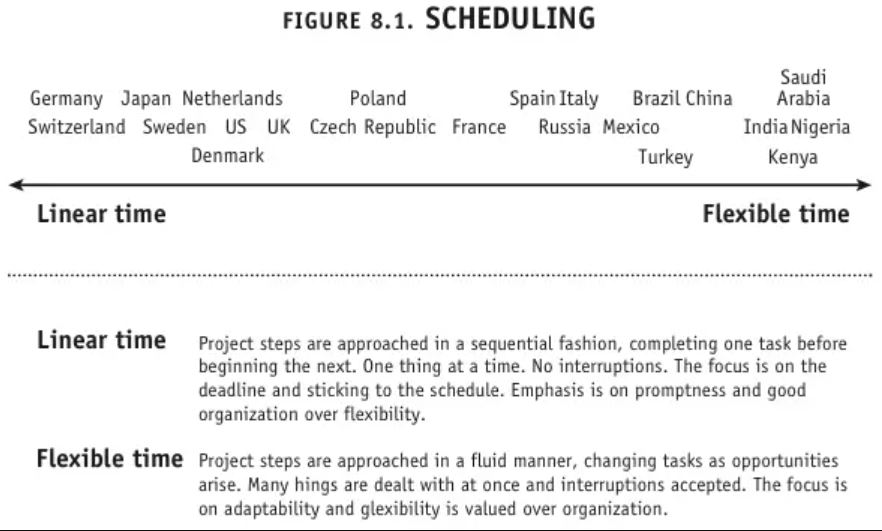 That different cultures treat time differently is one of the most common observations for anyone working or even traveling abroad. On one extreme you've got the exceedingly precise Germans and Swiss; Americans fall relatively close to this end of the spectrum; Western Europeans and Latin Americans tend to be more flexible; Africa, the Middle East, and India are extremely flexible.