In a previous blog post, I applied plain vanilla Reinforcement Learning policy gradient to solve the CartPole OpenAI gym classic control problem. In the subsequent blog post, I generalized that code (in a software engineering sense) and applied it to all classic control problems; the only "trick" was to quantize the applied action for the continuous problems to convert them to discrete problems. It was able to solve CartPole and Acrobot, but failed on Pendulum and MountainCar (the failure was unrelated to the discretization). I described the problem that I saw examining the numerics at the end of the post:

It occured to me that this sort of problem wouldn’t occur when using RL for Chess or Go, since in that case, the agent plays itself, and the winner would get a +1 reward, the loser a -1 reward. This means that gradient descent can’t converge on a bad solution by just adjusting the weights so that the probability of an arbitrary action becomes 1, because this gets supressed by the -1 reward parts in the loss function.

It then occured to me that it’s easy to simulate this setup with any game: let the agent play games, and once finished, pair the games, and the one with the higher episode reward (as set by the original rules of the game) is the winner, the other the loser. Overwrite the original reward, and simply use +1 for all actions taken by the winner, and -1 for all actions taken by the loser. In actual implementation, there is no need to actually pair: it’s easier to just play N games, sort the games by overall reward, and treat the lower half as losers and give them -1 rewards, and the upper half as winners and give them +1 rewards. N should be chosen to control variance, I used N=100 here.

The only "hack" necessary to make this work is on the MountainCar-v0 problem: the way the default reward returned by OpenAI Gym is structured, initially it returns a constant -200 (-1 for each timestep the agent doesn't reach the top of the hill, with 200 timesteps per episode). So with this default reward structure, this approach would fail, because the initial totally random agent has no way of knowing which way to proceed, as all runs return a constant -200 (min=median=avg=max=-200). To make this approach work, I defined a custom reward function, which is simply the maximum x-coordinate that the agent reaches, and set the solved reward threshold at 0.5, which is the position of the flag at the top of the hill. 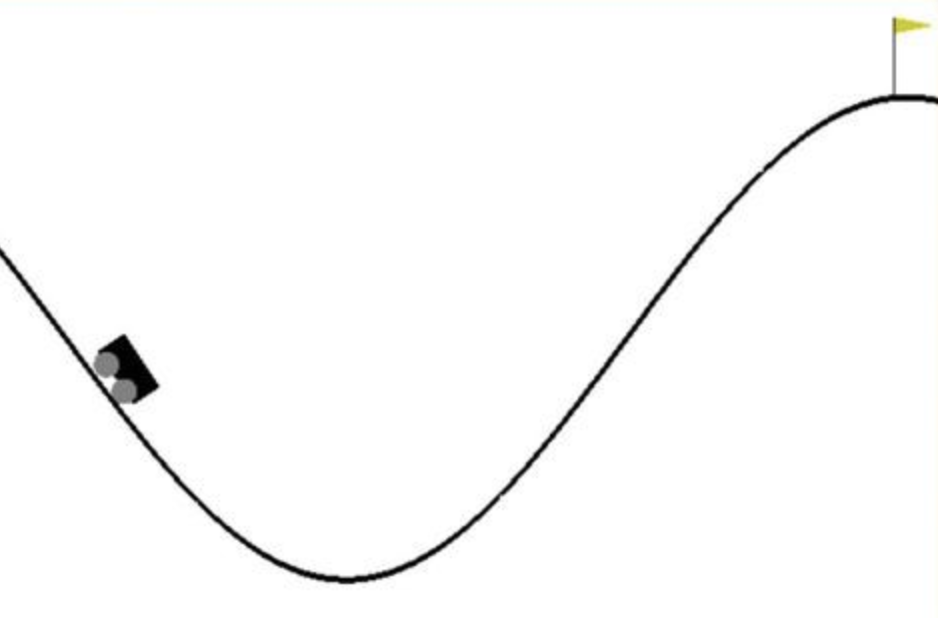 The code is very similar to the previous solutions. The ipython notebook is up on Github. The main change is in the main training loop, which collects episode results, splits them into winners and losers, and computes the custom loss function based on that:

This approach solves all the classic control problems from OpenAI Gym. I find it intellectually rewarding to adjust a simple, generic solution so it works across problems. Caveats of this approach are: