In the last post, I showed how to do A/B testing with the z-test. I used two examples:

In this post, let’s concentrate on timespent data. The t-test is a better version of z-tests for timespent data, because it explicitly models the uncertainty of the variance due to sampling. The Wikipedia page for Student’s t-test:

The t-test vs the z-test

The t-test models this uncertainty in the estimation of $ \sigma^2 $. When we perform a t-test, it feels very similar to the z-test, except in some places we write $N-1$ instead of $N$. And in the end, we don’t look up a $z$ value on a normal distribution, instead we look up a $t$ value on a t-distribution: 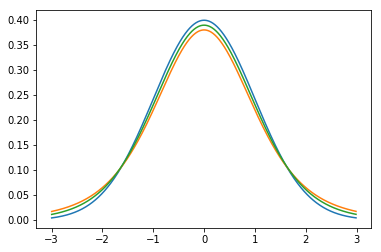 Note how the t-distributions have a bell shape like the normal, but have lower maximum and fatter tails. 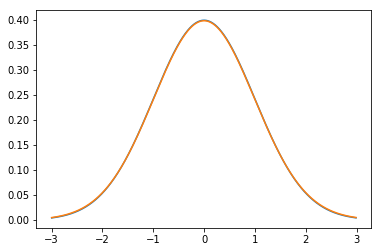 At a moderate sample size of $N=100$ there is effectively no difference between the distributions.

The difference effectively disappears at around $N=100$ sample size. So if you’re performing a timespent A/B test, and you have 100s or more samples in each bucket, the t-test and the z-test will yield numerically identical results. This is becauce at such sample sizes, the estimate of $s^2$ for $\sigma_p^2$ becomes really good for estimating the mean, and it’s divided by $N$ anyway, so the importance of the estimate goes down with increasing $N$.

When googling for “z test vs t test”, a lot of advice goes like “use the t-test if you don’t know the variance” and “use the t-test for $N<100$”. This is not incorrect, but it’s a bit confusing. For A/B testing, a clear and concise statement is: in A/B testing you never know the population mean, you’re estimating it, so always use the t-test. For $N>100$, the t-test numerically yields the same results as the z-test.

Let’s perform a Monte-Carlo simulation to see how the t-test becomes the z-test. The statsmodel package has both t and z-tests (1 sided and 2 sided). Let’s assume we have true populations for A and B, we take some samples from both to estimate the mean, and we perform both a t-test and a z-test to get 1-sided p-values. We then compute the average and maximum absolute p-value difference:

Let’s see what happens if we assume that both A and B are identical exponentials (so the null hypothesis is true), and we very sample size from 10 to 500:

The output is (blue is mean, orange is maximum absolute p-value difference across 100 A/B tests performed at each sample size): 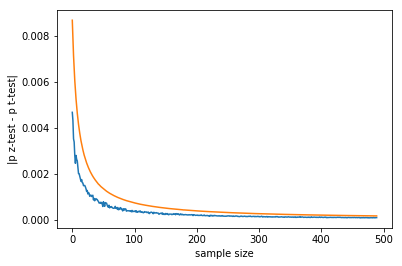 Let’s see what happens when the A/B test is actually working, ie. B has better timespent on average (so the null hypothesis is false). To make the effect more visible, let’s pretend that timespent doubled. For this, we just have to change the lines:

in the above code. This yields: 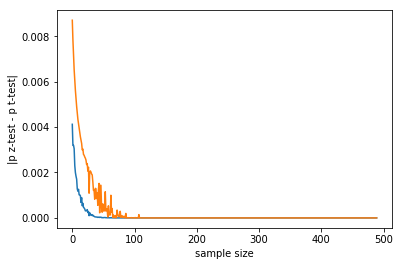 In a timespent A/B test scenario, we should always use the t-test. Both the t and z-tests are a library call, so there’s no difference in effort. For real-life high sample size use-cases, numerically there’s no difference in the p-values computed. However, the z-test is a much simpler mental model, as it models the test statistic as the intuitive normal distribution and there’s no degrees of freedom involved like in the t-distribution. So, my rule of thumb: use the t-test, pretend it’s a z-test.