The basic flow of an A/B test (in a frequentist setting) is roughly: 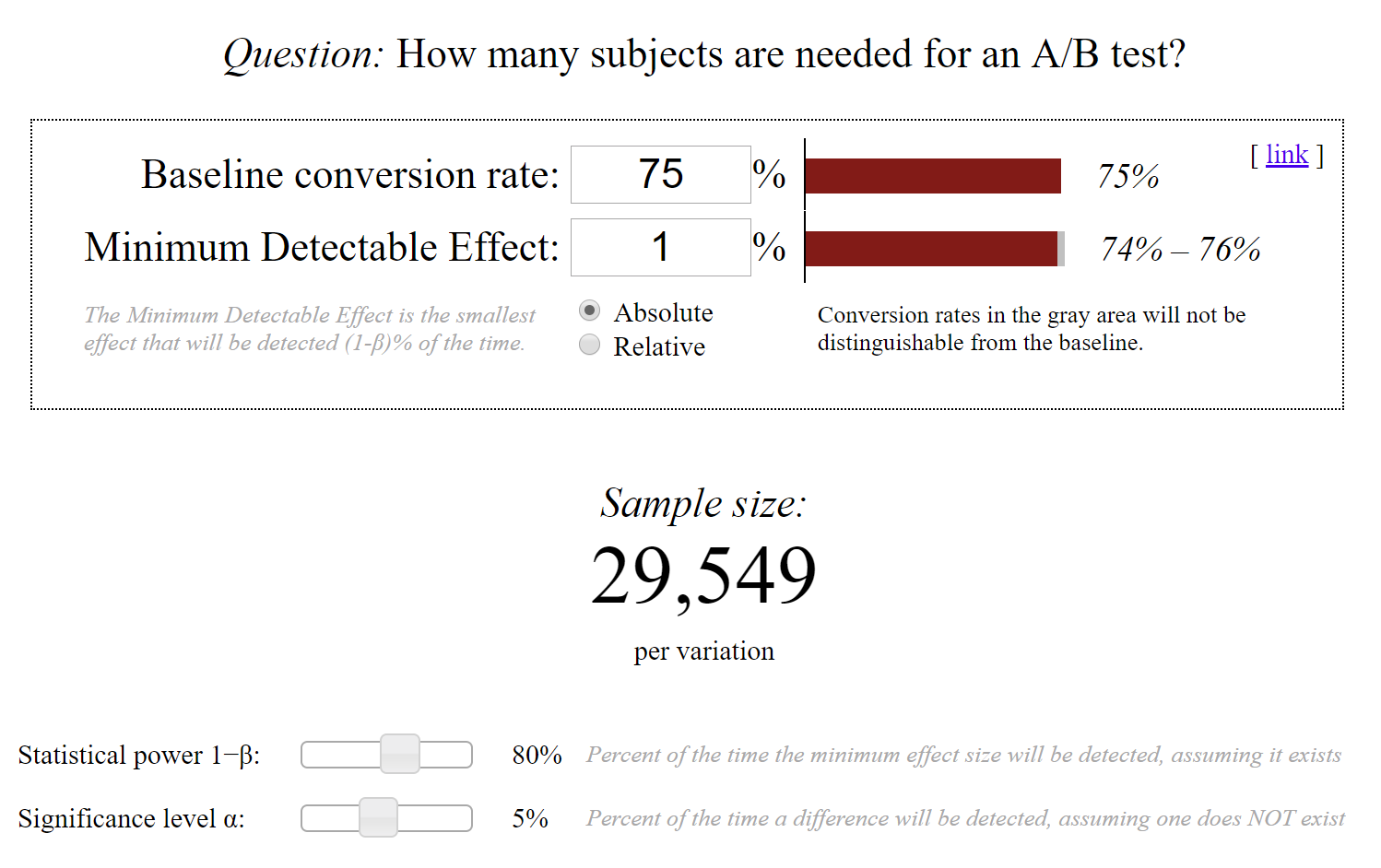 At this point, in the A/B testing tool, there are 2 magic parameters that the Data Scientist has to set for the Chi-squared test:

Most tools will default α=0.05 and 1-β=0.8, which is a sensible default. With these, the A/B testing tool will tell the Data Scientist how many N samples she needs to collect per variant (control and test) to be able to detect the given lift (1%) from the base value (75%), with the specified statistics (FPR, TPR).

By pushing down the FPR, we can increase our confidence in our results. More power will enable us to catch more working experiments. But there is no free lunch, we will need to collect more N samples for this. So what is a good trade-off here? Almost all tools default to the values above, but there is nothing special about them.

The reason I started thinking about this is that in a startup setting, when there are low volumes [for the subset we're testing, eg. a specific city for a delivery company], it takes a lot of days to collect the N samples, which slows down the product development velocity. This is essentially a management concern: if A/B testing is seen by management to be a burden that slows things down, then it won't happen, which is a net loss. Often I feel that it's probably fine to run at α=0.1 or even α=0.2, or, in other words, to accept higher p-values as statistically significant; being wrong 20% of the time is not too terrible in a startup setting when no lives are at stake (ie. we're not experimenting with new drugs).

So let's try to quantify this with a toy model: 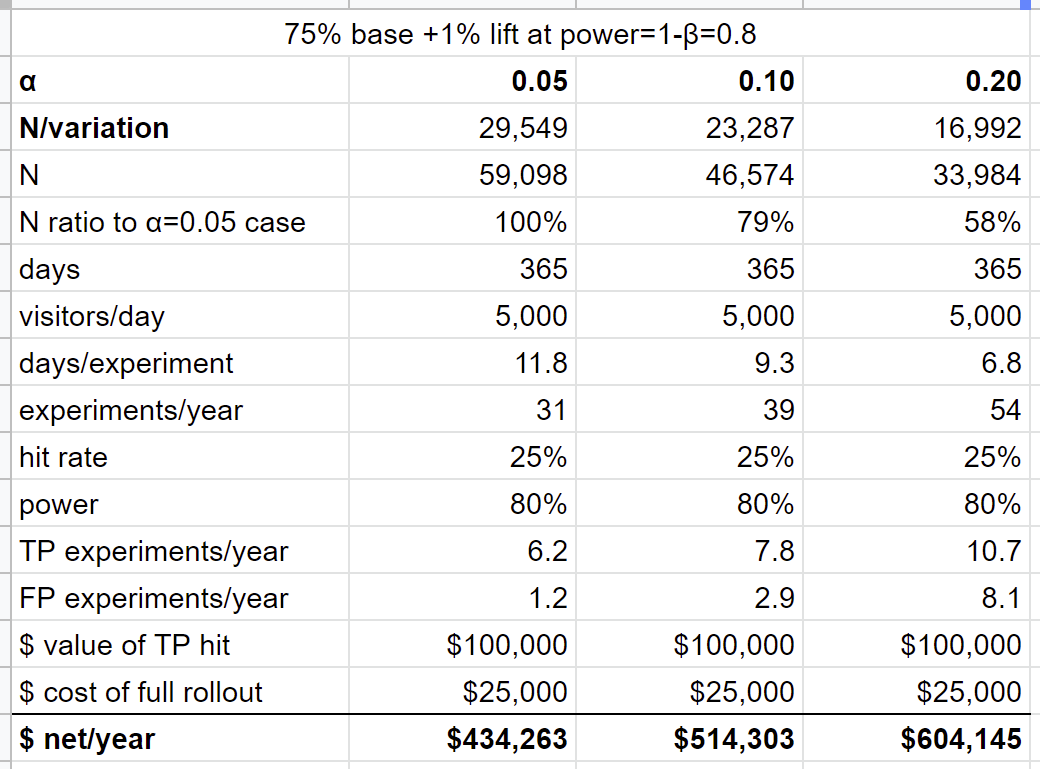 In this base scenario, with these parameters, running at high α is better. It yields more experiments, because we need less sample size, so we will find more hits, and even though we incur more false positives, it's still worth it. As we increase the cost of the rollout, this benefit goes away, as the cost of rolling out the FPs eats up the value generated by the TPs. Having said that, I think this scenario applies in many startups: moving fast over being sure is worth it. 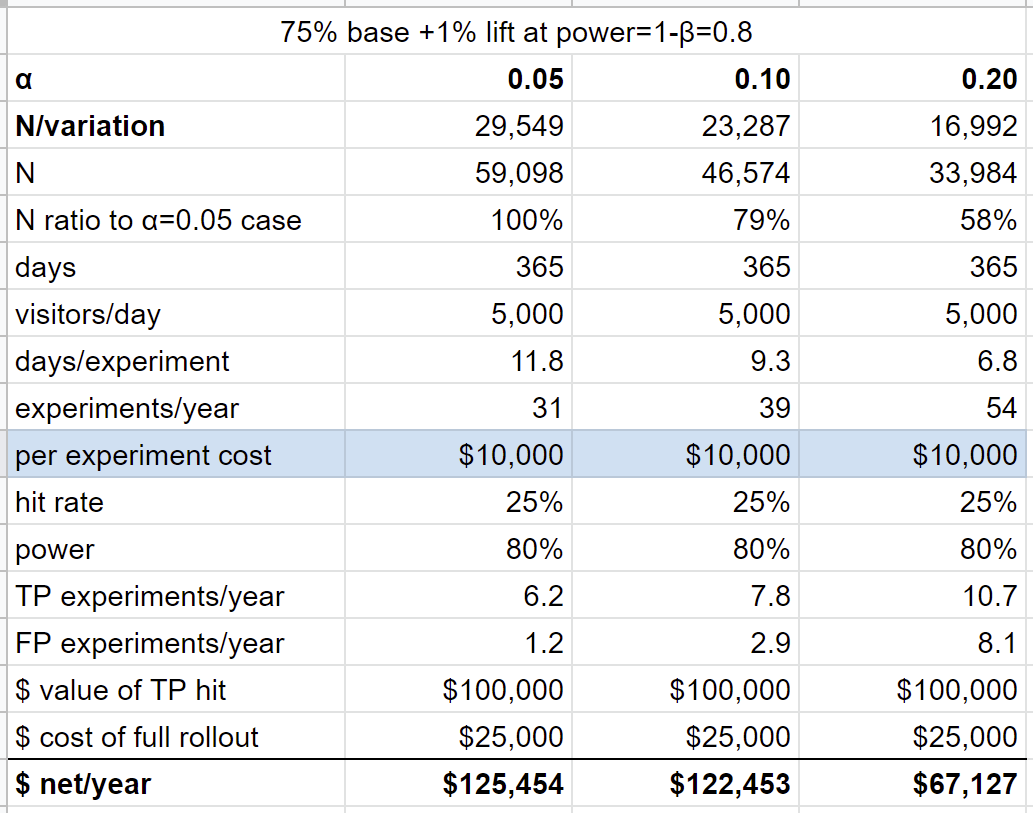 In this scenario, α=0.05 is the better choice. When we move fast at higher αs, we lose more on running and rolling out our FPs than we gain by finding more TPs.

Let's try another one, where we add a loss, ie. 50% of our false positives actually make things worse, and in this case we incur a loss of $50,000 (new parameters highlighted in blue): 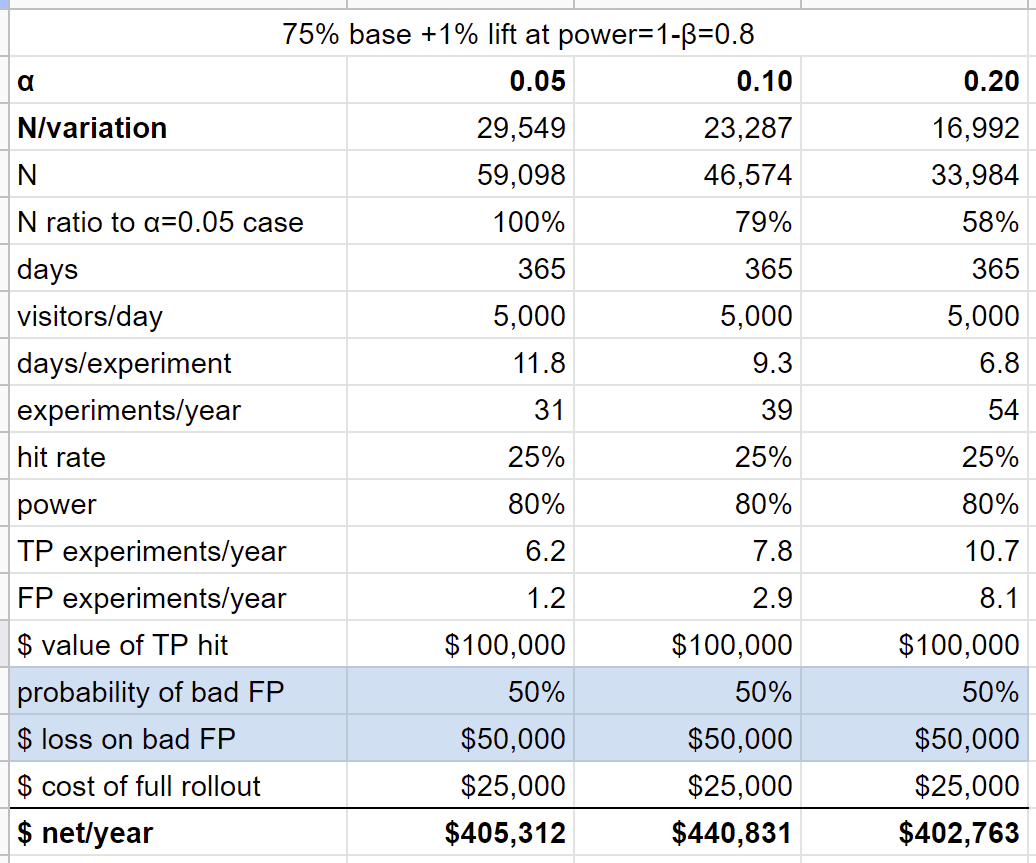 Let's combine the two, and have both cost and loss: 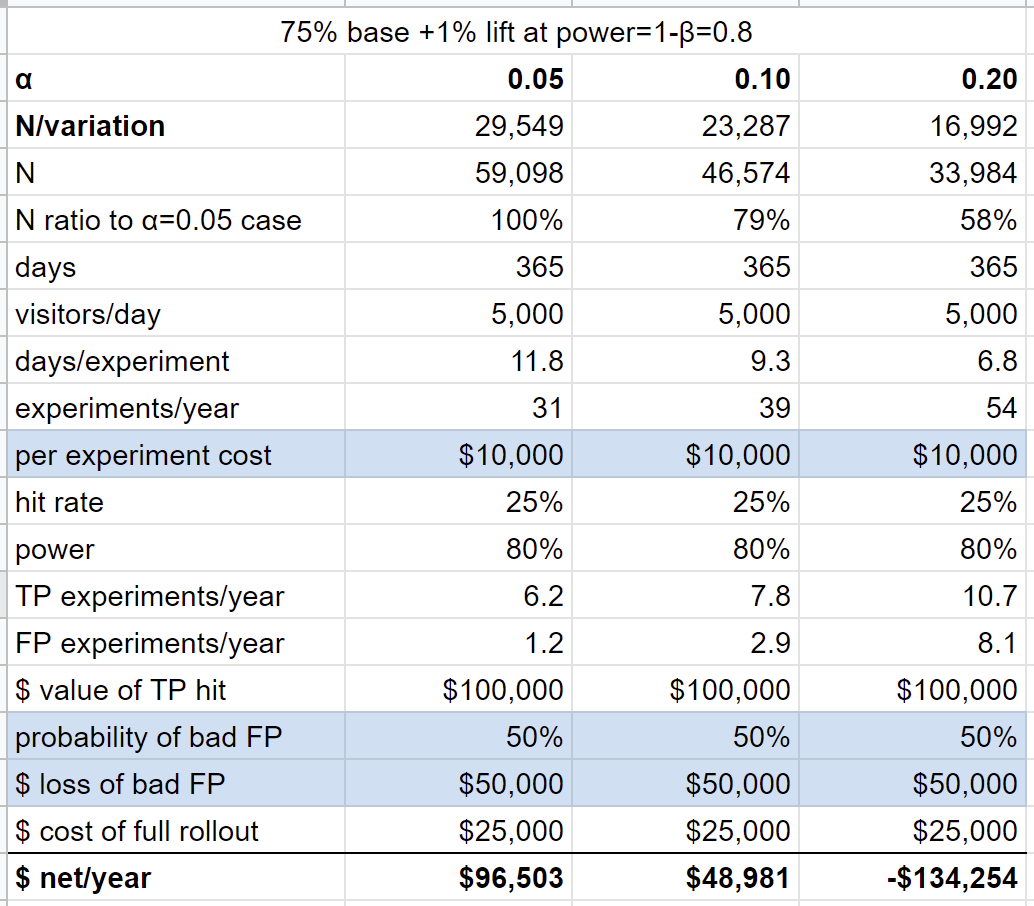 In this scenario, we're better off being sure and running at α=0.05, running at α=0.20 would actually cause the startup to lose money (not to mention the salary of the Data Scientist!).

As these simple toy models show, it does make sense to increase α, the accepted false positive rate, in some situations. For example, at my current company the base case is the closest to reality, except the value of a hit is even higher and the rollout cost is even lower (and the likelihood of a loss on a FP is low, sending more notifications is unlikely to yield less likely availability for delivery when our driver shows up).

Having said that, there are valid counter-arguments to running at high α (accepting higher p-values):

Fortunately, building a spreadsheet like this takes less than an hour, so everybody can make up their own mind, weigh the pros and cons of statistical and management aspects, and find a trade-off in (α, β) parameter space which works for them!