I first wrote about entropy in What's the entropy of a fair coin toss? followed by Cross entropy, joint entropy, conditional entropy and relative entropy, which explained these different entropy-related concepts. Now I will discuss 4 uses of entropy in Data Science:

The ipython notebook is here.

Cross entropy as a loss function

When building a supervised neural network classifier, cross entropy or relative entropy (usually called Kullback–Leibler divergence in Deep Learning frameworks) are common loss functions. For example, suppose we're building an MNIST digit classifier, so there are 10 output classes, corresponding to digits 0..9. Since there are 10 classes, the neural network has 10 outputs. When the network is being trained, for each input image we know the actual digits it's showing, which we encode in a vector like $v_{actual}=[0,0,..,1]$. Since the last number is 1, this is a digit 9. Then we run the input image through the neural network, and read out the outputs for the 10 classes, which may look like $v_{predicted}=[0.1, 0, 0, ... 0, 0.1, 0.8]$. To make sure the output probabilities some to 1, we always put a softmax layer as the last layer of the network. So in this case, the cross entropy loss is $H(p=actual, q=predicted) = -\sum_i p_i log [ q_i ] = - log [ 0.8 ] $. In this expression the only $p_i$ that's non-zero is the one for the actual class, and for that $p_i = 1$, so cross entropy loss really only contains that one term. Note that during actual training, cross entropy loss is computed (summed) for an entire minibatch, ie. multiple training points.

It would be tempting to say that cross entropy loss doesn't care what probabilities the model assigns to the incorrect classes, but this is misleading. As mentioned before, to get the probabilities of the output layer to sum to 1, the last layer is always a softmax, and each of the output probabilities depends on all the outputs of the previous layer. In the MNIST case, we have 10 outputs $z_i$, which are then softmax'd like $q_i = \frac{e^{z_i}}{\sum_j e^{z_j}}$, the divident contains all $z_i$s, so $q_i = q_i(z_0 ... z_9)$.

What's the difference between cross entropy and relative entropy as a loss function? In neural networks, the training method is usually some form of gradient descent, which means that the loss function is differentiated by the weights of the neural network. Per the previous article, relative entropy and cross entropy are related like $ D_{KL}(actual | predicted) = H(actual, predicted) - H(actual) $. Here, $H(actual)$ is a constant with respect to the network weights [but it changes for each mini-batch], so it's derivative wrt to the network weights is 0. Because of this, although the two loss values are different, their derivatives wrt network weights are identical ( $ \frac{\partial D_{KL}(actual | predicted)}{\partial w_i} = \frac{\partial H(actual, predicted)}{\partial w_i} $ because $ \frac{\partial H(actual)}{\partial w_i} = 0$ ), so their usage is equivalent, since the computed gradients propagated back into the network will be exactly the same! 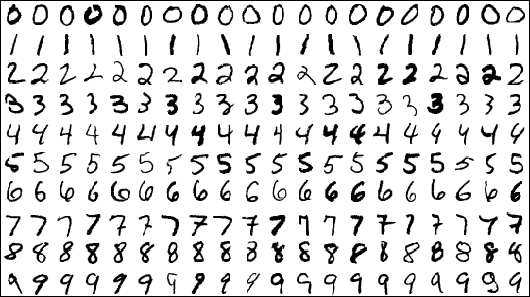 Suppose we want to evaluate some unsupervised clustering algorithms, or the same algorithm with different feature vectors. We have some labeled data, so we can compare the cluster classification to the real classes. So we have for each sample point $i$ a feature vector $x_i$, actual class $A_i$ and the clustering algorithm's cluster identity ie. the modeled class $M_i$. Note that the $M_i$s will not be labeled, since a clustering algorithm just says that a subset of points belong to a cluster, but it doesn't know what that cluster is, there is no name given to it. The $A_i$s are usually labeled, like car, boat, airplane. Because the $A_i$s and $M_i$s are different, cross entropy and relative entropy don't make sense here, since there it's assumed that the two random variables take on the same values.

One approach is to take each cluster (so set of points where $M_i$ is the same), and calculate the entropy using the $A_i$s. We want this to be low, since that corresponds to a cluster with lots of points with the same actual class. Do this for each cluster, and then take the weighted sum of per-cluster entropies. What I described is just the conditional entropy $H(A|M)$! The downside of using conditional entropy is that it can be gamed by creating a lot of little clusters; in the worst case, each point is its own cluster, and all per-cluster entropies are 0. This is best controlled by limiting the number of clusters the clustering algorithm is allowed to create to the number of actual classes.

A better alternative is to use mutual information $I(A, C)$, which will be zero if $A$ and $M$ are completely independent (worst case), and maximal if $A$ and $M$ completely detemine each other, ie. if there are an exactly equal number of classes, and knowing a modeled class $M_i$ always corresponds to the same $A_i$, and vica versa. For more, see this article.

The implementation of the above clustering metrics are straightforward in Python. To demonstrate, let's use the standard Iris flower dataset, which has 4 float numbers describing the length and the width of the sepals and petals in centimeters, and a label for the type of iris (setosa, versicolor, virginica). Let's use k-means clustering from Scikit learn and have it return 3 clusters. Then, let's compute both the conditional entropy and information gain between the modeled and actual classes. Let's see what happens if we run the clustering with just 1, 2, 3 or all 4 of the available feature vector elements:

The result is as expected, allowing the clustering algorithm to see more of the feature vector yields lower relative entropy (better) and higher informationg gain (better).

We can use entropy to see how much information is contained in a column. For example, suppose we have a table users, which has a column country. We know that most of our users are located in our home country, but there may be others. We can compute the per-column entropy with a bit of SQL:

This snippet can be extended to handle more columns, the simplest method is to concatenate columns like '(' || col1 || ',' || col2 || ... ')'. Note that if entropy_bits is 0, it means all values in the column are the same. Interestingly, the entropy (in bits) we compute is also the number of bits a database engine would need to efficiently encode these values in a row-wise manner.

We can also check if another column contains additional information. Suppose there is another column in users called locale, which is the language locale of their browser, like en_us or fr_fr. For this we can use conditional entropy H(locale|country):

For example, if country -> locale is a deterministic mapping, ie. USA always maps to en_us, then conditional entropy will be 0. As in earlier examples, information gain also makes sense for tabular data.

The above examples show that entropy is a common and useful concept in Data Science. I plan to write a follow-up article about interesting examples of entropy in Physics.