In the previous articles I talked about entropy, and as an example of entropy in Physics, I derived the Sackur-Tetrode entropy of a monatomic ideal glass. Here I will discuss what I call probabilistic spin glass, a simple mathematical model of magnetized matter with short range interactions. In this article I introduce the concept and run some Monte Carlo simulations to get a feel for the model, and use entropy to characterize its order-disorder transition. The code is up on Github.

Let's take an $N \times N$ sized spin system, ie. each cell has two states, ↑ and ↓, or 0 and 1. If each spin is indepdendent of its neighbours, then the whole system is just a list of indepdendent random variables, the geometry doesn't matter. To make it interesting, let's make the spins dependent on the neighbours: for spin $s$ and neighbour $n$: $P(s=↑ | n=↑) = P(s=↓ | n=↓) = p$. So the spins align with probability $p$ and are opposite with probability $1-p$.

Let's take the above and run Monte Carlo simulations to see what happens as we vary $p$. We will take an array of size $N \times N$ and start filling out the spins according to the probabilities above. First we have to introduce an additional probability $p_0$, which is the probability of the first (let's say top left) spin being ↑. Once we set the first spin, we can set the rest of the spins in the first row. Once we get to the second row, we run into a difficulty. The spins above it have already been set, so these spins have 2 set neighbours. We need to compute the conditional probability $P(s=↑ | n_1=., n_2=.)$ given 2 neighbours $n_1$ and $n_2$ in a way that is consistent with the basic definition of $p$. Using Bayes' theorem, for the specific case of $P(s=↑ | n_1=↑, n_2=↑)$:

The rest of the system: 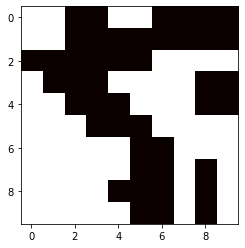 First, let's make sure the math and logic is correct. Let's simulate a large $100 \times 100$ spin glass with the above rules, then count all pairs, and make sure that the original conditional probability holds:

First, let's look at the special case of $p=0$. In this case the spin glass looks always looks like this (or inverted): 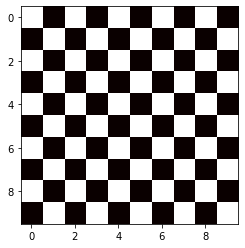 This is because $p=0$ forces the spins to always be inverted compared to the neighbour.

As $p$ increases, disorder increases. Note that at $p=0.5$ the neighboring spins are independent. At $p > 0.5$ domains form, because spins prefer to align with each other, but sometimes randomly an inversion occurs, and a patch is formed.

Let's check how the fraction $f$ of aligned spins varies with $p$: 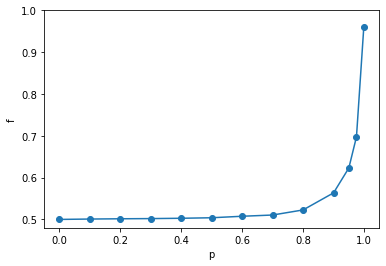 Perhaps unintuitively, the dependence is not linear. The plot has two parts:

$f$ is constant between $0 \leq p \leq \frac{1}{2}$, but visually we can see that the system goes from order (chessboard) to complete disorder (independent spins). We can use entropy to characterize the order-disorder property of the model. Let's do brute-force Monte Carlo simulations to compute the entropy of a small $4 \times 4$ spin glass: 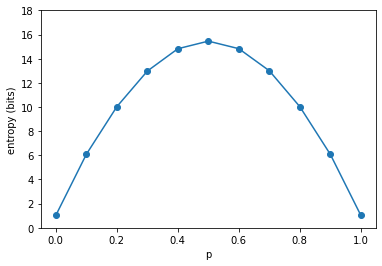 Note: the entropy shown on the y-axis is specific to this $4 \times 4$ spin glass, it would be higher for a larger system.

The concave shape of the entropy plot is the same as that of a $p$-biased coin with entropy function $H(p)=-(p) log[p] - (1-p)log[1-p]$, so with respect to entropy the spin glass behaves like a biased coin, where the biasing factor $p$ is the correlation strength between neighboring spins.

Spin glasses are a widely studied models of magnetism in Physics. Here I used the toy probabilistic spin glass model to avoid having to introduce too much physical formalism (eg. Hamiltonian). We saw how the behaviour of the spin glass strongly depends on $p$, the correlation probability, and that entropy describes the order-disorder aspect of the system that we observe visually.