Generative Adversarial Networks (GANs) were introduced by Ian Goodfellow in 2014. GANs are able to learn a probability distribution and generate new samples from noise per the probability distribution. In plain english, this means GANs can be trained on a set of images (or audio, etc), and will be able to produce realistic looking new "fake" images (or audio, etc). To connect the two explanations: MNIST digits are 28x28 grascale images and pixel values are 0-255, so an MNIST digit can be thought of as a 28x28=784 element vector, where each element is 0-255. Some (tiny) portions of this space look like digits, most parts look like noise (also others look like letters, etc.)

For another explanation, here is Wikipedia:

A generative adversarial network (GAN) is a class of machine learning frameworks designed by Ian Goodfellow and his colleagues in 2014. Two neural networks contest with each other in a game (in the form of a zero-sum game, where one agent's gain is another agent's loss). Given a training set, this technique learns to generate new data with the same statistics as the training set. For example, a GAN trained on photographs can generate new photographs that look at least superficially authentic to human observers, having many realistic characteristics. Though originally proposed as a form of generative model for unsupervised learning, GANs have also proven useful for semi-supervised learning, fully supervised learning, and reinforcement learning. The core idea of a GAN is based on the "indirect" training through the discriminator, which itself is also being updated dynamically. This basically means that the generator is not trained to minimize the distance to a specific image, but rather to fool the discriminator. This enables the model to learn in an unsupervised manner.

I took an old implementation from the abandoned Pytorch-GAN repo, and made it work on Google Colab, the notebook is here. You can just run the notebook and generate your own digits.

Note: In a previous post, I tried to train the Softmax MNIST GAN in Pytorch Lighting. I decided to stop using Pytorch Lightning for now, because I ran into numerous framework issues, see this and this issue I opened. Also, the Softmax GAN itself gave me trouble even on Pytorch, so I decided to take a step back and start with Goodfellow's classic GAN.

Conceptually a GAN program has 6 parts:

The explanation of the role of the generator and discriminator networks, from Wikipedia:

Note that 1-3. above is the same for many MNIST GAN architectures, whether it's Classic, Softmax, Wasserstein, etc. For the Classic GAN, we use Binary Cross Entropy (BCE) in both the generator and discriminator's loss function, ie. a measure of the distance between two probability distributions:

Note that "straighforward" is a professional euphemism. One of the reasons Deep Learning took off a few years ago is that people realized that introducing non-linearities like ReLUs makes the network work (vs. purely linear NNs). Guessing what neural network works for a given use-case is a mix of black art, experimentation and copy/paste from existing.

As mentioned above, the discriminator's loss is binary cross entropy (BCE), which is BCELoss in Pytorch:

The overall logic of the training loop is (see comments):

Note that this is the first GAN invented, so it still suffers from childhood issues such as "mode collapse", where the GAN mostly emits the same digits. A better name would be "range collapse" in my opinion, in mathematics range is the term for the space that a function generates into. 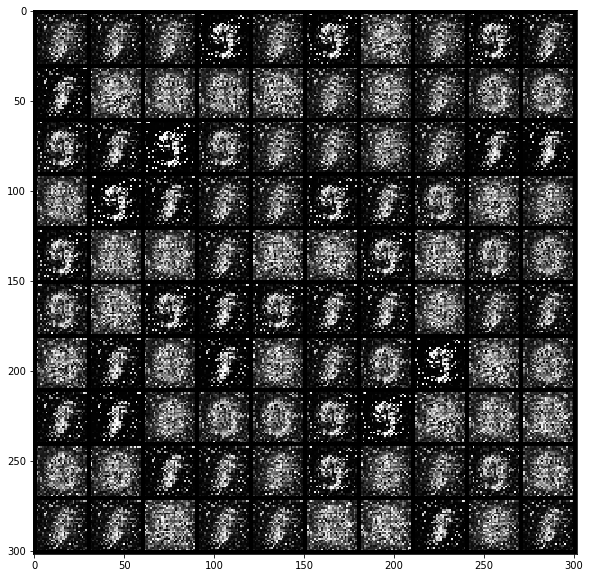 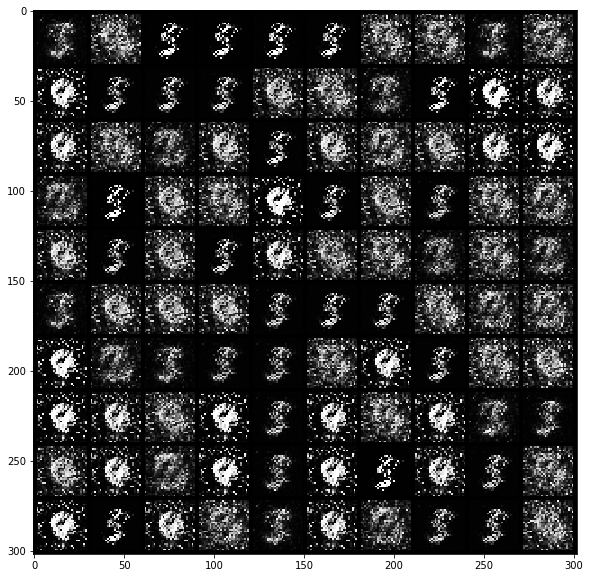 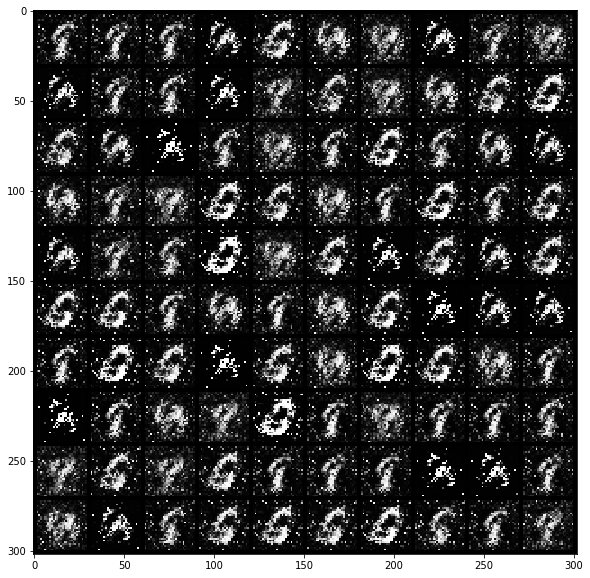 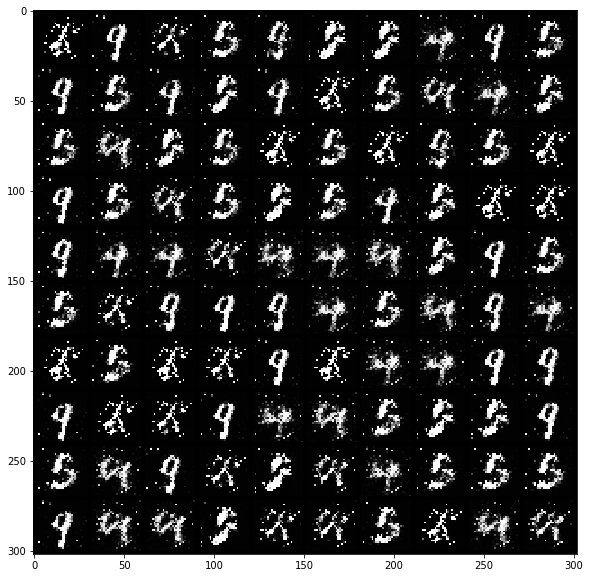 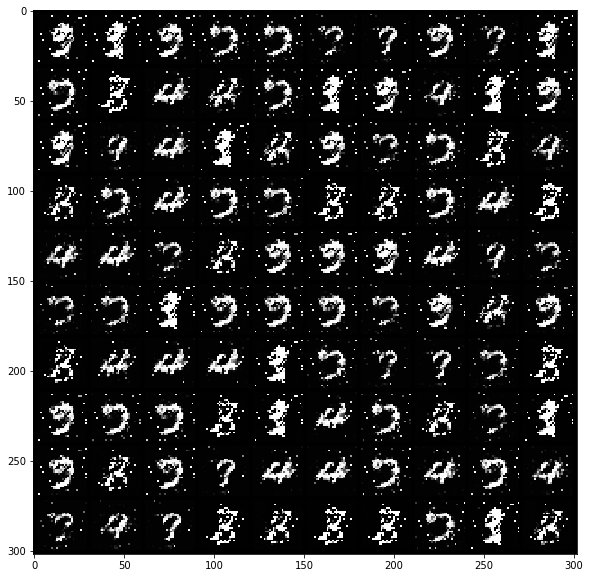 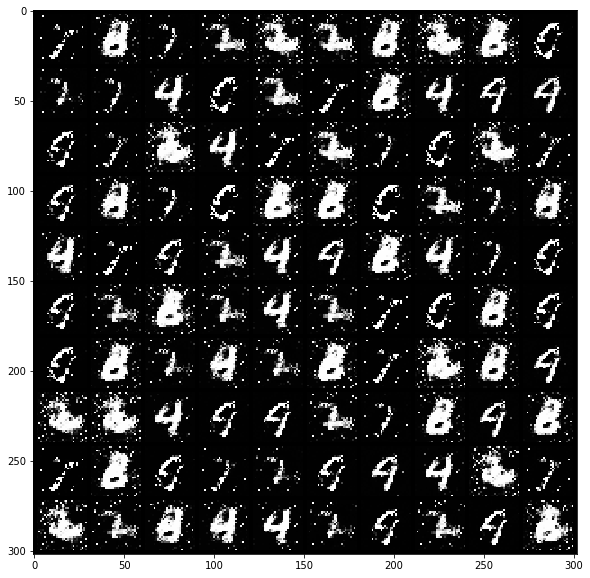 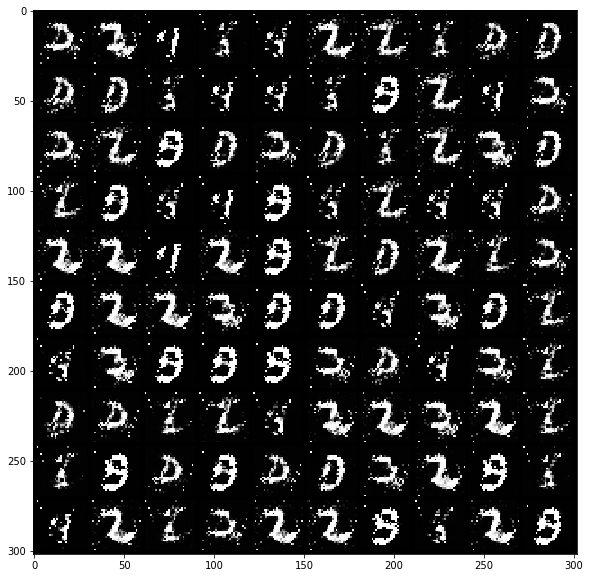 In the next post, I will look at the Wasserstein GAN, which doesn't suffer from range collapse and produces beautiful MNIST digits.