Data Scientists run lots of A/B tests, whether they’re working on SaaS products, social networking, logistics or self-driving cars. A/B testing is a form of hypothesis testing, a decision-making method powered by statistics. By following the rules of hypothesis testing we make sure we have gathered enough and strong enough evidence to support our decisions.

When working with hypothesis testing, the desciptions of the statistical methods often have normality assumptions. For example, the Wikipedia page for the z-test starts like this:

This a common source of confusion. What does it mean that “the test statistic under the null hypothesis can be approximated by a normal distribution”? And whatever that is, how do I know it’s a valid assumption for my data?

Let’s take a concrete example. Suppose we’re doing an A/B test, and we’re measuring two metrics for variants A and B: a $C$ conversion rate (at what rate do people convert) and a $T$ timespent (how many minutes do they spend in the product). In both case, our null hypothesis would be “A and B are the same”, which is translated into the language of mathematics like:

In probability theory, the central limit theorem (CLT) establishes that, in some situations, when independent random variables are added, their properly normalized sum tends toward a normal distribution (informally a "bell curve") even if the original variables themselves are not normally distributed. The theorem is a key concept in probability theory because it implies that probabilistic and statistical methods that work for normal distributions can be applicable to many problems involving other types of distributions.

For example, suppose that a sample is obtained containing many observations, each observation being randomly generated in a way that does not depend on the values of the other observations, and that the arithmetic mean of the observed values is computed. If this procedure is performed many times, the central limit theorem says that the distribution of the average will be closely approximated by a normal distribution. A simple example of this is that if one flips a coin many times the probability of getting a given number of heads in a series of flips will approach a normal curve, with mean equal to half the total number of flips in each series; in the limit of an infinite number of flips, it will equal a normal curve.

In layman’s terms, the CLT says that: given a population P, with some metric M whose true average is $ \mu_M $, and you take a random sample of independent measurements from P and take the average $ a_M $, then $ a_M $ follows a normal distribution. Note that the error of the measurement, $ e_M = \mu_M - a_M $ also follows a normal distribution since $ \mu_M $ is a constant. $ e_M $ is the quantity most closely related to the $ H_0 $ null hypothesis' test statistic.

We can "prove" this to ourselves by running Monte Carlo simulations:

Let's use scipy, it gives us convenient ways to sample standard distributions. First, a function which samples a given distribution and shows a histogram of the samples against the probability density function of the distribution. We can use this to check that we're doing the right thing:

Let's visualize a uniform, an exponential and a normal distribution using the above function:

So these are the original population distributions, and we're trying to estimate the mean by drawing samples. Let's write code to do this:

Note that the CLT also works for discrete distributions such as the Bernoulli distribution, the underlying distribution for conversions. 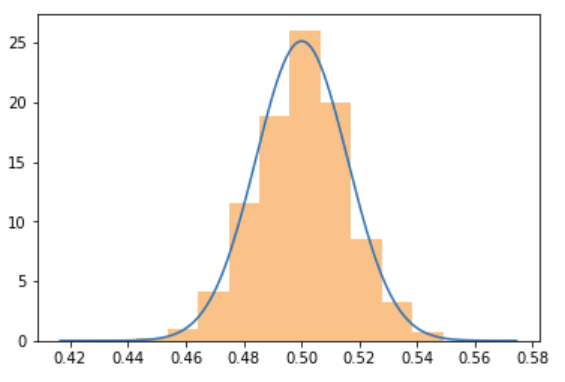 The Central Limit Theorem is the reason why, when you're doing A/B testing on averages (such as conversion or average timespents), the normality assumption for hypothesis testing is usually justified. In the next post I will show cases when the CLT does not apply.