All articles in this series:

One of the core functions of money is to replace a barter system. In a barter system, if A makes apples and B makes bananas, they can agree on an apple/banana exchange rate, and trade between each other — this is called bartering. A third actor in the economy, C is producing cucumbers. Suppose it so happens that A wants B's bananas, B wants C's cucumbers and C wants A's apples (a directed cyclic graph) — in this scenario pairwise trades are not possible, the economy is blocked. It would be nice if they could use some intermediate asset to trade and unblock the economy. In the real world, we use fiat money such as USD for this: A, B and C set their prices in USD, and assuming everybody has sufficient reserves of USD, they can trade, even if they don't want each others goods that day.

For a currency to be acceptable to the participants of the economy, it has to be somewhat stable. Suppose D is a Data Scientist, and gets her salary in the common currency, let's say it's 100 USD. For USD to be a useful currency, in the sense that D accepts it as payment, she has to be able to buy basic goods, such as apples, bananas, cucumbers — and Big Macs at a relatively stable price.

The image shows that getting a (relatively) fixed salary in USD and then buying basic goods is a safe bet. The hi/lo ratio on the USD chart is 1.12, this is the inflationary effect, and was 12% in these 5 years. However, the hi/lo ratio on the BTC chart is 17.5, which shows that getting a salary in BTC, or exchanging goods in BTC is not a safe bet. Your BTC salary, or the BTC you receive for your goods could be worth significantly less in a couple of months or years.

But wait, the value of BTC actually went up! In the case of USD, the hi/lo is 1.12, and the hi is at the tail end, meaning 1 USD buys less Big Macs than previously. With BTC, it's the other way around, 1 BTC buys 17.5x more Big Macs than 5 years ago! So does this invalidate the arguments above?

No, it does not. If you look at the Big Mac price in BTC, yes, overall it's "favorable" to BTC holders in this snapshot, but there were also times when it the price of a Big Mac in BTCs went up 3-4x in a year. The problem is, with a speculative asset, wide swings in the positive directions are always eventually matched by wide swings in the negative direction — and if this affects your livelihood, such as being able to buy basic goods with your salary, that is unacceptable.

This shows what everybody knows anyway — cryptocurrencies like BTC are not a useful currency for trading goods or getting salaries, because they are speculative. 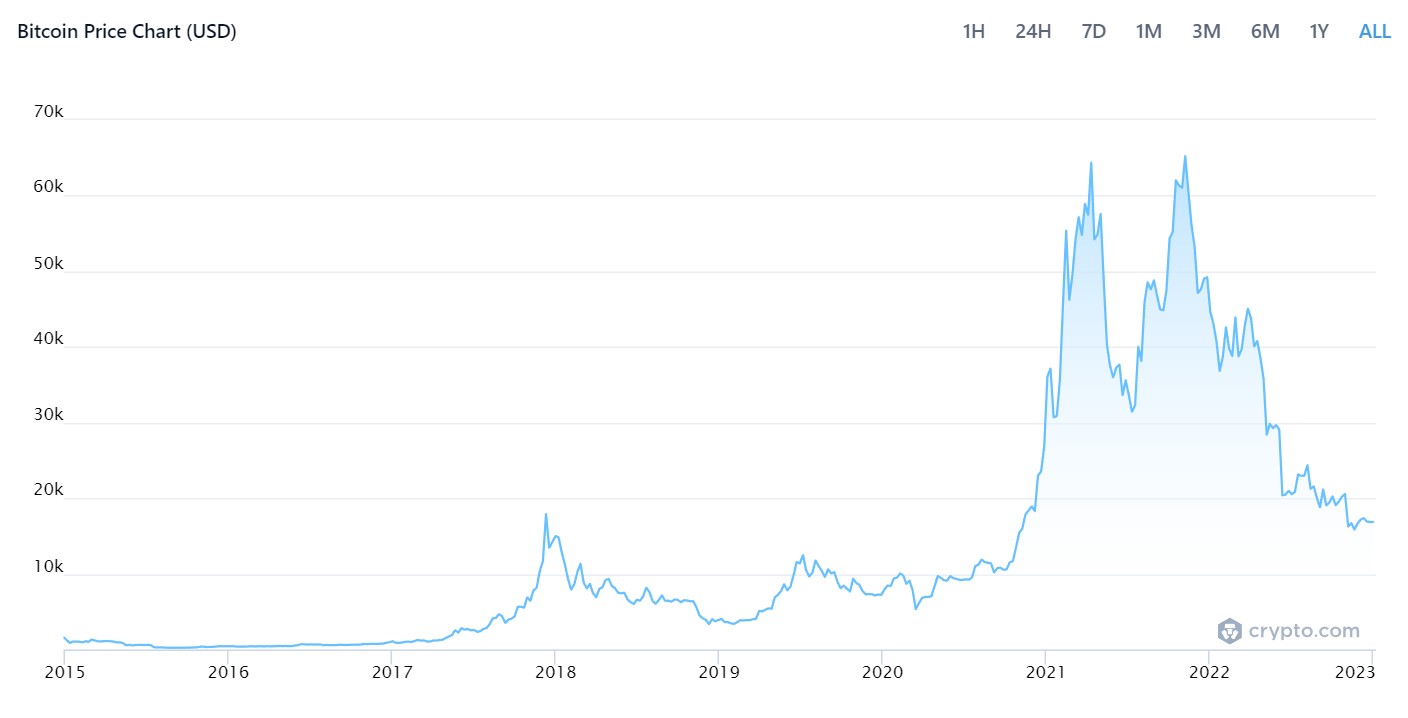 Okay, but BTC is just one type of cryptocurrency, there are 1000s of others. Maybe another one is better? Most cryptocurrencies suffer from the same problem as BTC, they are speculative, so they are not a useful currency for trading goods or getting salaries.

One exception to this could be stablecoins. However, stablecoins are not really useful in the above scenario, since stablecoins assume the presense of a fiat currency like USD to which it is pegged — so the actors in the economy might as well use USD. You could say that that is right, but cryptocurrencies have other desirable technical advantages, like anonymity, irreversibility, etc. Regarding these perceived advantages, let's see how stablecoins work out in practice (repeated from the previous post). This portion is repeated from the previous article.

A stablecoin is a token whose value is pegged to a traditional fiat currency. Most stablecoins are pegged to \$1 USD. The most popular stablecoins at the time of writing are:

The way stablecoins are supposed to work is roughly like this: a company releases a new stablecoin, let's say it's pegged to \$1. The company mints a large amount of the stablecoins for itself (reserve), and then sells some of them to users for \$1 (in circulation). So users give the company \$1 and get 1 stablecoin in exchange. The company guarantees that it holds on to the \$1 in its bank accounts, ie. it doesn't squander it away. Users can then transact with their stablecoins, enjoying the benefits of cryptocurrencies. If they ever need USD, for example because they want to buy bread, or they need to pay their US taxes, they can sell their stablecoins back to the minting company and get real dollars back. Sounds great and is a very useful concept in the crypto world.

So, in this case, is there new value created? If everybody plays their part (the price of the token remains \$1 and the company holds on to the reserves), users can safely pretend that 1 stablecoin is worth \$1. So in this sense, user value is created, but the stablecoin itself has no value detached from the reserves. In reality, the company has \$1 and a liability of \$1, which nets to 0. And the user has a stablecoin, which is the other side of that liability. So the net value in the system is still \$1 (not \$2). For this reason, the minting company cannot pretend that its reserve stablecoins are worth real dollars.

I came up with the following analogy to stablecoins: imagine there is a cult of finance people called Purists, living in a village called Puretown. Purists really like the feel and smell of freshly printed USDs. So they go to the bank, get 1 million \$1 bills, and bring it home to marvel at it. But they don't want to use it in circulation, because then it won't be as nice and fresh. So they photocopy each one, and agree that in their village they will use the photocopied bills to pay each other, while the Major holds on to the real USD bills in a safe at city hall. And, if they ever need a real dollar bill to transact outside their village (ecosystem), they can go back to the Major of Puretown, who holds the real USD reserves, give him a photocopied bill, and get back a real USD bill. We can agree that no value was created (they didn't magically make \$2M out of \$1M), we just have a bunch of cultists using monopoly money in their own ecosystem!

Also, it's not true that the reserves of the stablecoin (the non-circulating tokens that are still with the company) are now worth real dollars. Those are unbacked tokens, worth nothing. 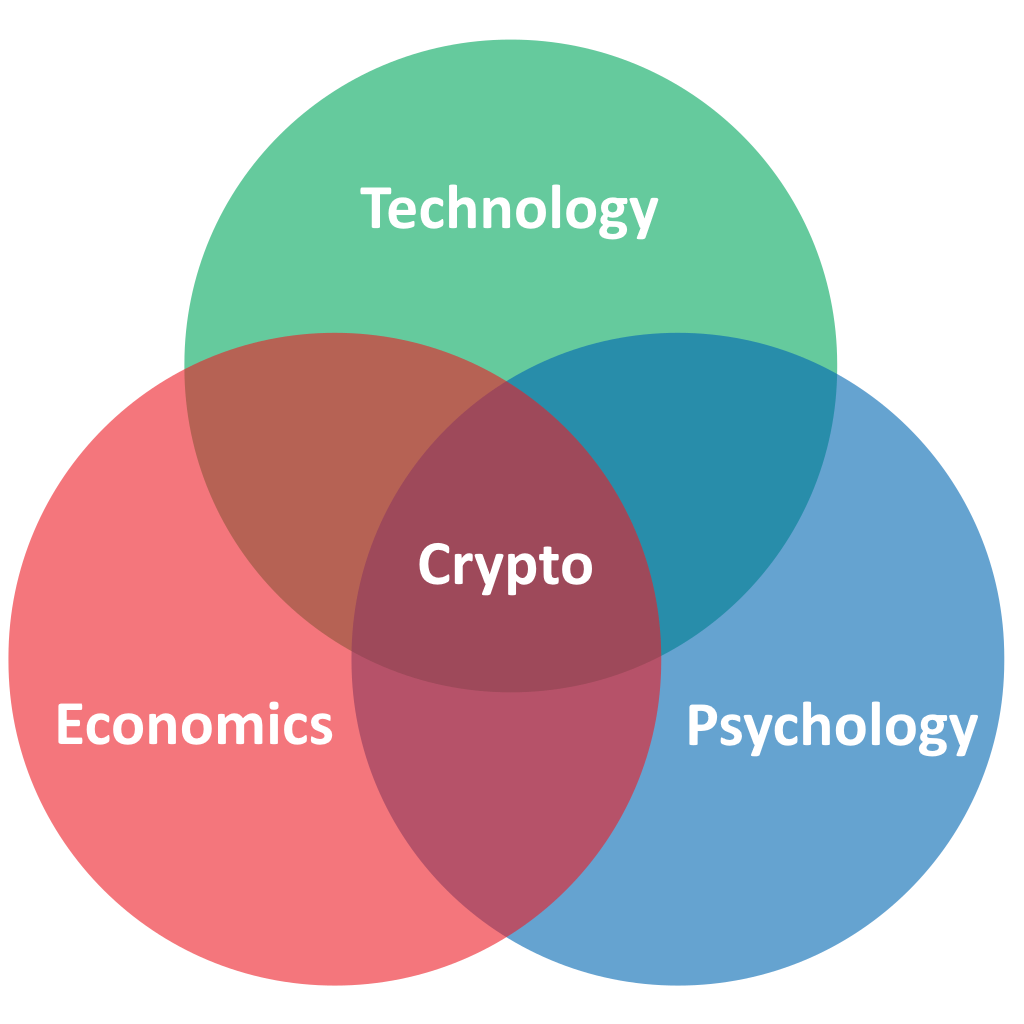 The problem with stablecoins always comes from the Psychology circle in the Venn-diagram above. There are two (related) failure modes:

Note: there are also algorithimic stablecoins, which do not have any backing USDs at all. These are supported pure fantasy disguised as complex algorithmic mumbo-jumbo. The most famous of these was Terra, which got "de-pegged" this year:

So, in practice, stablecoins have also not proven to be a useful currency for trading goods or getting salaries.

So far I have argued that:

The fundamental difference between fiat money and crypocurrencies is that fiat money's stability is backed by men with guns. Fiat money is issued by nation states; nation states have laws and collect taxes; if you don't obey the laws, or don't pay your taxes, men with guns will take your money and/or freedom away; there is no opt-out. Note: in some countries, you can opt-out by leaving the country; in others, such as the US, you have to send taxes home even if you're abroad.

Because of these factors, there is no scenario where all participants lose hope in the fiat currency, stop using it, causing the currency to be useless/worthless — at least not without a major regime change or (civil) war, which also changes the loyalty of men with guns. But it happens all the time with crypto (multiple times a year in the US and western countries), much more frequently then wars. The USD has been around since 1792, the GBP since 1707.

Ironically, many cryptocurrency users are trying to avoid laws and taxes, which are the exact things which would make their currency stable.

Having said the above, there have been cases when cryptocurrencies have provided real (non-speculative) value for people. A good example is a mismanaged country where citizen's money in the bank (whether denominated in the nation's currency or USD) is frozen and eventually lost. In these cases, one of the options to fled one's money is to convert it to BTC, and move it abroad.

However, I would argue that this is a temporary use-case. Nation states (and their money) fail much less frequently than cryptocurrencies, and even the most long-lived cryptocurrency BTC had a 17.5x hi/lo ratio in the last 5 years — so it can act as a good technical vehicle for moving money out of a troubled country for short period of time, but it is not a stable store of value or a useful currency.

At the end of the day, both fiat and cryptocurrencies have no intrinsic value — they depend on the participants of the economy agreeing to use it for exchange, at certain exchange rates for goods.

Fiat money has attributed value because a government declares it legal tender and enforces its use through laws and taxes, enforced by men with guns; cryptocurrencies are purely belief based. And history shows the former is stronger than the latter.

Because cryptocurrencies are not useful as actual everyday money, their users (try to) use it as a speculative store of value, which is essentially a ponzi scheme or greater fool theory. The only reason it makes sense for me to buy BTC at $100 if I believe there will be a greater fool who will buy it at $101 from me. For him, it only makes sense to buy from me at $101 if she believes there will be an even greater fool at $102, and so on. Any profit made on cryptocurrencies is someone else's loss, since no economic value is created. Note that this is not the case for stocks, where the underlying asset, the company is creating value through its revenues and profits.

In the next and final article on cryptocurrencies, I will talk about the perceived technical advantages of crypto.